When it comes to your business, do you know the value of your brand? In other words, what is the monetary impact of your brand to your bottom line? According to Forbes magazine, the values of some of the world’s top brands look like this: Apple, $104.3 billion; Microsoft, $56.7 billion; and Coca-Cola, $54.9 billion.

Your brand value is most likely not in the billions like these global companies, but nonetheless, it’s important to maintain your brand value. In this issue of Promotional Consultant Today, we share five ways to retain your reputation, make the most of economic upswings and positively impact your bottom line from Mark Di Somma, a partner and senior brand strategist at The Blake Project.

Be a champion of your brand and try these tactics to continue to increase your brand value.

Source: Mark Di Somma is a partner and senior brand strategist at The Blake Project. For more than 20 years he has helped decision makers, brand owners and brand agencies define, articulate and elevate the value of their brands.

If you have ever scarfed McNuggets while in traffic, or wolfed down a Whopper in a parking lot in between sales appointments, you’re going to want to read this.

The geniuses – yes, we’re declaring them geniuses – at Milkmen Design have come up with a product called DipClip.

Basically, it’s an in-car condiment holder for folks who enjoy dipping sauces when getting down on transit noshing.

Brilliant in its simplicity and practicality, the DipClip consists of a clip that attaches to vehicle vents. Into the clip’s 5-in-1 aperture design, there fits a food-safe polypropylene Ramekin that holds 1.3 fl. oz. – about five packets of ketchup. Of course, if ketchup isn’t your thing, you can also drop in other condiments, anything from barbecue sauce and mustard to hummus and salad dressing.

“At Milkmen Design, we believe that dipping sauces were made to go with nuggets and fries. For generations, humans had to choose between making a mess in their vehicle or consuming bland, sauce-free food. We were tired of standing by idly as the perfect union of fries and nuggets, and the precious sauces that compliment them, grew strained. So we created the DipClip to repair this relationship, reuniting ketchup with French fry, nugget with BBQ, and so on.” 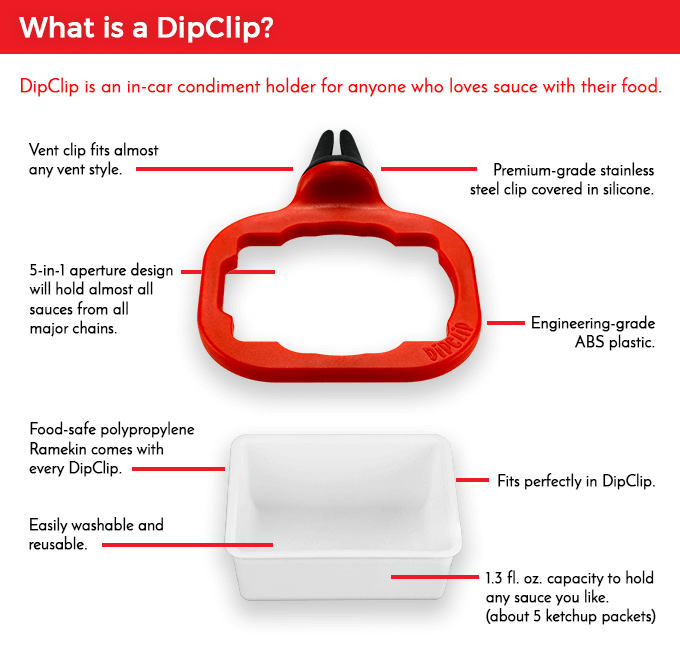 Folks, these guys are humanitarians.

While the fast food gods have clearly inspired this ingenious invention, the reality remains that the DipClip is still in Kickstarter phase. As of Friday morning (Eastern Time), the DipClip campaign had blown past its Kickstarter goal of $10,000 and exceeded $48,000. The campaign was scheduled to run through January 5.

Once DipClip becomes commercially available, we could see it potentially being a much sought-after item in the branded merchandise space. It’s a product anyone who drives – and eats – could use. It would be displayed in a high-visibility area where recipients are daily – their cars. And we’re guessing it’s not going to be super pricey. While the clip doesn’t have a lot of surface area for branding, the Ramekin could hold a logo and appeal to a range of end-clients – from fast-food chains themselves to auto industry clients.

With DipClip, commuting just got tastier, and promo pros may one day reap sales from that delicious fact.

The best branded giveaways are ones that are useful and become integrated into your customer’s and employee’s routines.  Whether that be a travel product they can’t imagine going on a trip without, or a favorite fleece blanket they love to snuggle up with during their Netflix binges.  We all have our favorite go-to products we can’t live without. And the emotional connection people make with their favorite products creates an opportunity for your brand to turn customers into fans.

So how can you give branded products that will not only be kept but loved?  We’re here to help!

We turned to the retail sector and explored bestseller lists from retail giants like Amazon and Target.  Lo and behold, a ton of awesome and trendy products that your customers are searching for and buying are products that are available to brand.  With these retail trends in mind, we created an ideabook for you that takes the guesswork out of promotional products.  See some of our favorites from the best seller’s list below!

No matter your brand or budget, there is a perfect promotion to engage your customers and create Brand Love moments. Check out all of our picks here, or contact us to talk through your promotional strategy!

Business travel can be tough. Just ask anyone who’s lived out of a suitcase, stood in line for hours at a busy airport or eaten dinner alone after a day of never-ending client meetings.

If the recipients on your gift list spend a lot of time traveling, we’ve got some can’t-miss ideas that will make life a little easier. These are practical, stylish gifts that your audience would be thrilled to receive. And best of all, they make the road less traveled a little less bumpy.

Cords are so yesterday, so keep yourself tangle-free in busy airports and on long flights with wireless technology. Wireless headphones, already gaining in popularity, quickly became the go-to choice when Apple released the iPhone 7 without a traditional 3.5mm headphone jack. If the biggest tech company in the world thinks that the future is wireless, we’re paying attention.

Lightweight jackets are a must when traveling to different climates. Space and comfort are at a premium when you’re on the road or trying to fit everything you need into your luggage.

RFID is a BIG buzzword these days since the technology helps protect against identity theft. These items are typically made from a material that interferes with radio waves, making a credit card’s RFID chip difficult to read by someone trying to “skim” sensitive information from the card or passport.

Stay versatile with Ultra Comfort Knits in washable wool blends. There’s only so much you can pack when you’re living out of a suitcase. Whether you’re dressing business, casual or somewhere in between, these are pieces you can pair with a polo and dress pants for work during the day, or throw them over a T-shirt and wear them with your favorite jeans at night.

Space-saving compression bags and packing cubes are great tools to help you travel light and stay organized. Packing efficiently means you won’t have to leave any essentials at home, and also makes unpacking a breeze.

Ultimately, the goal is to choose a gift that people are going to notice – something that establishes or reinforces a brand and is useful for the recipient. You want to provide a giveaway that becomes an essential part of your customer’s lives, so why not give the gift of better business travel.